Even though air travel is the fastest way to cover long distances, there are various complications that a passenger has  to face on long flights. 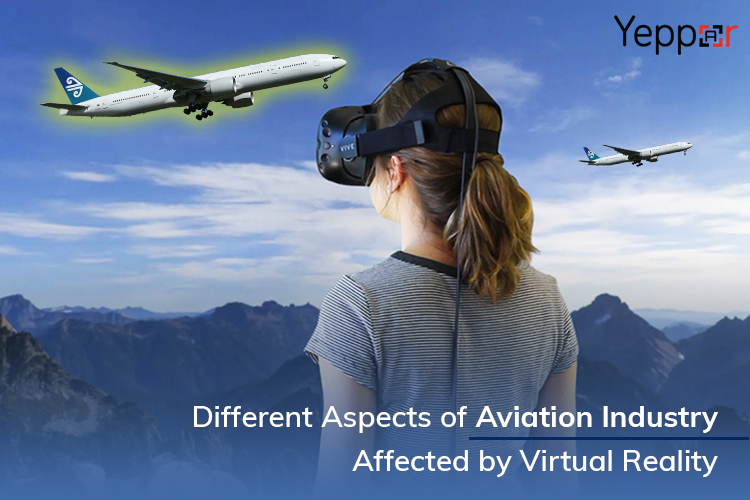 While problems like code sharing, flight delays, and unexpected flight cancellation make air travel frustrating, jet lags and air turbulence have their separate effects on a passenger’s body. Also, uncomfortable seats and long flight durations make up for a boring and annoying trip for the traveler.

Various airlines are trying to overcome these problems by using modern technological advancements and to deliver better flight experience to their customers. Virtual Reality is among the latest technological trend that is spreading like wildfire to different business verticals.

With the evolution of virtual reality, several new use cases of VR has popped up. Its application in different sectors has emerged and is now revolutionizing the aviation industry with its immersive and interactive environment.

While problems like jet lags cannot be conquered with virtual reality, its immersive technology can still be implemented to improve the experience of a passenger.

The impact of virtual reality is tremendously visible in the amusement and gaming sectors. Its ability to let a person dive straight into the heart of a storyline has made it popular among various people.

Various airlines giants like Lufthansa and Boeing have appreciated the potential of VR in boosting the experience of their passengers and accepted its application to let their customers have access to VR headsets in commercial flights.

Virtual Reality headsets help a person to escape from the physical world in both a visual and audio sense. This way, even claustrophobic or acrophobic passengers can immerse themselves in a different surrounding and travel without any worries.

With the use of VR headsets, passengers will be able to find an escape from boring and annoying flight time.

A Perfect Medium to Train and Practice:

An untrained pilot can be a threat to himself, plane, passengers, and his staff. Pilots are therefore trained extensively to make sure that they are fit to fly a plane.

Before virtual reality, pilots were trained using a simulation device developed using replica cockpits and computer screens. However, these training devices didn’t provide a proper indication for depth and separate simulation devices were made to train a pilot for specific planes.

This was not a feasible method to train the pilots as building these devices was very costly and had very limited usage.

Virtual Reality let a person interact with objects in a virtual environment which makes it ideal for training purposes. Preparing simulations in VR is also quite easy. It only requires some lines of codes blended with animations and images to provide a perfect training simulation.

During a training regime using virtual reality, the only thing that a pilot will need is a VR headset and a joystick. All the rest can be easily produced using VR technology.

Pilots are not the only one who can train in virtual reality. Crew members and ground crew are needed to be ready in case of an emergency.

By training through a simulation program in virtual reality, flight staff can learn ways to handle an unfortunate incident like hijacking and plane crash. They can also be trained to give first aid treatment to a passenger who falls ill in a virtual simulation.

VR will help in the training of a pilot and other crew members in a much easier, adaptive, and cost-effective manner.

Studying aviation engineering requires the availability of complex structures and machines. Many students don’t even get to observe an aircraft up close unless it requires some repairs.

In the course of a whole studying regime, many engineers get deprived to even study various aircraft engines like turboprop or jet engines.

With the help of virtual reality, students can easily gain access to study new and improved engines and other complex components of an aircraft. They can easily learn their working, characteristics, and conduct tests on them to produce better components.

By conducting tests in a virtual environment a user can also improve upon existing technologies and build more powerful and aerodynamic airplanes.

Virtual Reality will also help airlines and aircraft manufacturers to build better equipment for aircraft and inspect for any damage or mistakes easily in the virtual surroundings.